This thermal analysis study is an updated thermal analysis for the full system design of the high vacuum pumping system to be used with the integrated test stand for a variety of experiments with micro-propulsion engines and high energy particle beams. The goal and purpose of the study is to build off of older, and currently outdated and obsolete studies, Steady-State Static Thermal Analysis of the Edwards EO4 Diffusion Pump, and Steady-State Thermal Analysis of an Optically Dense Water Cooled Baffle to determine the steady state thermal characteristics of an upgraded 8″  water cooled baffle in operation with the entire diffusion pump and new adapter plate configuration, for both uncooled and cooled baffle operation.

Updates from the prior studies and designs includes the use of a new, large stainless steel 8″ water cooled baffle utilizing a dual chevron baffle fin topology, with a cooling line welded straight through the body and to the fins. Two new, large adapter plates made from 12″ x 12″ x 1″ ATP-5 aluminum plate stock are included, which serve for both baffle mounting and adapting as well as mounting the entire high vacuum sub-assembly to the 8020 test stand. The Edwards EO4 diffusion pump CAD model has also been significantly updated, with all cooling lines fully and accurately modeled to allow for more accurate thermal simulation of cooling effects across the entire structure. Other slight model errors from prior iterations have been updated and fixed as well. In addition, a key flaw in prior studies was determined with the used coefficient for determining the thermal load of diffusion pump oil on the internal surfaces of the pump during nominal operation, resulting in much lower simulated temperatures than what would be anticipated in real life. A new thermal coefficient has been applied to the updated model, making the current study more realistic.

Several basic case studies for the following simulation results are explored, looking at the expected nominal operating condition (ambient temperature at 25C, and cooling system maintaining coolant temperature at ambient levels of 25C), and comparing this with best case scenario conditions (chiller running optimally at 15C regulated coolant temperature) and worst case scenario (cooling system running “hot” at 35C, with an elevated ambient temperature of 35C.) The thermal modeling results are based off the CAD and thermal modeling capabilities of Fusion 360. Differences between the actual dynamic operation of the pump and the static modeling of the system is covered in the prior study, and estimates are given to best compensate for these differences based on simulation limitations. The results also directly utilize the prior study setup and results to create the foundation for additional thermal loading modeled in the complete setup, as described below.

As a side note, while the study aims to be as accurate as possible, there are inherent limitations with the presented methods. The system that is being simulated is a complex, highly dynamic system with multiple heat sources and loads that can vary with each other. The models presented are simplified cases using ideal scenarios (such as constant temperatures across the cooling lines.) In reality however, cooling line temperatures will vary from input to output of the system, which would result is higher temperatures in certain areas. Ambient temperatures, both inside and outside of the high vacuum system can also fluctuate and affect system response. In addition, actual temperatures inside the vacuum chamber due to diffusion pump operation are not currently known for this setup. To simplify analysis, internal vacuum temperature above the diffusion pump was set to ambient. In reality, this will be higher, resulting in elevated baffle temperatures. Actual measurements can be taken with the system in operation to better improve future simulations. Internal dynamic processes are also not possible to model with the simulation software, such as the movement of oil through the diffusion pump and its various phase changes, however a best guess approximation for a simplified steady state thermal transfer to the walls is applied to attempt to approximate these complex processes.

As mentioned in the study overview above, this thermal analysis features an updated CAD model of the Edwards EO4 diffusion pump for more accurate modeling of the thermal response due to the complete cooling line structure. Input parameters for the model were based off of average values found in literature for various modes of heat transfer for the different materials and conditions present in the model. These parameters were also used in the prior two thermal analysis studies as well.

Figure 1 provides an overall view of the updated diffusion pump model. Figure 2 provides a cross-sectional view of the diffusion pump under its nominal operating conditions as described. As can be seen from the initial results looking at just the EO4 diffusion pump, operating at 850W heater power, at 25C ambient with 25C cooling water, the cooling lines provide critical cooling control and temperature regulation to the body. The effect is particularly noticeable around the inlet of the foreline port, which includes the accurately modeled cooling lines. Also of equal importance is the effectiveness of the heat shroud around the bottom of the pump, used to minimize heat transfer from the heating element to the outer surroundings. 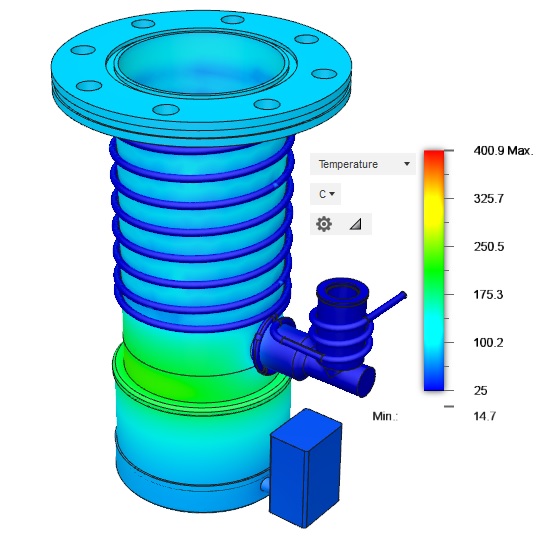 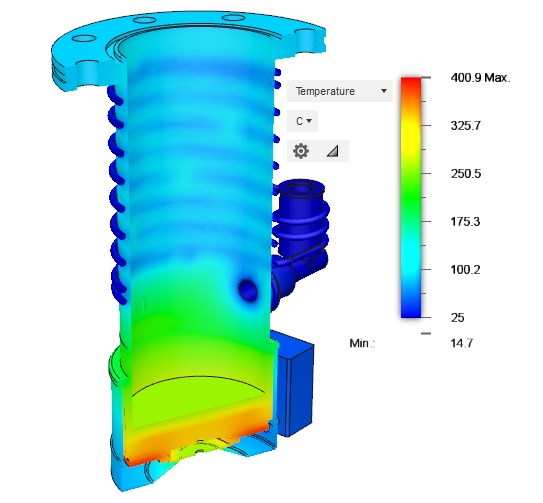 Figure 3 and Figure 4 show the full and cross sectional views of the full model used for the thermal analysis, with the above parameters for reference, including the diffusion pump, DC-705 oil fill, adapter plates, and 8″ baffle. 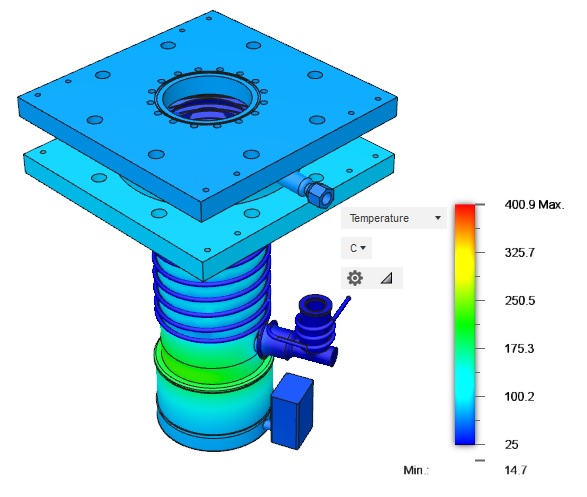 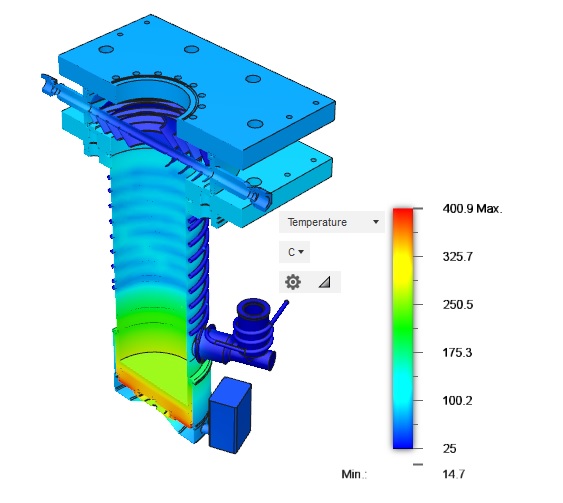 Zooming in on the original full scale for temperature gradients, we can look more closely at the average body temperature between the cooling lines for the diffusion pump, as well as the heat transferred to the adapter plates and baffle assembly. The three case studies are displayed below for: 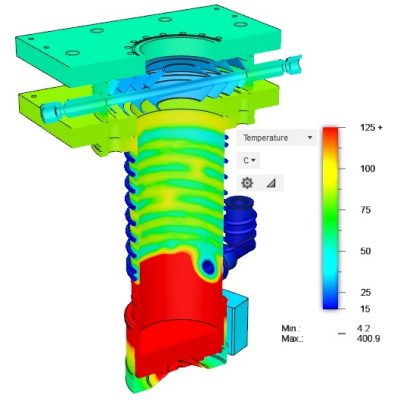 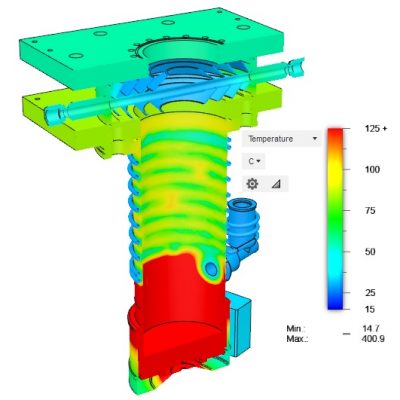 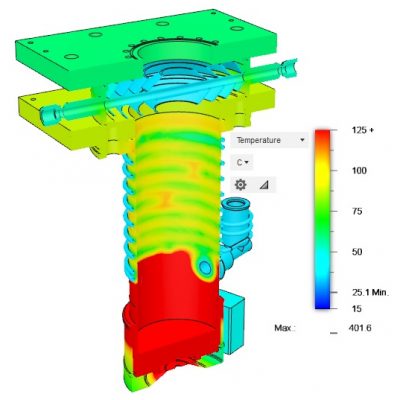 As can be seen in the above model results, average temperature of the baffle fins are relatively unaffected from thermal transfer from the diffusion pump during operation. While the adapter plates and outside casing of the baffle still exhibit direct heating from contact with the hot diffusion pump, the internal baffle fins are sufficiently well decoupled and isolated from the main body. This shows that the baffle is well designed thermally, and the average temperature gradient across the fins is primarily affected by the temperature of the cooling line, as well as slightly affected by ambient temperature inside of the vacuum system.

From the above cases, three additional simulations were run, adding a constant cooling water flow to the baffle for: 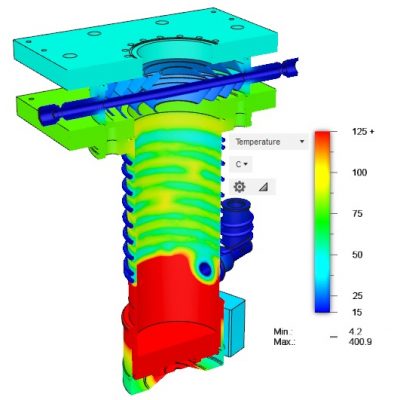 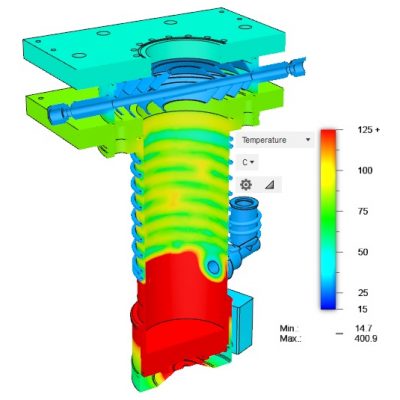 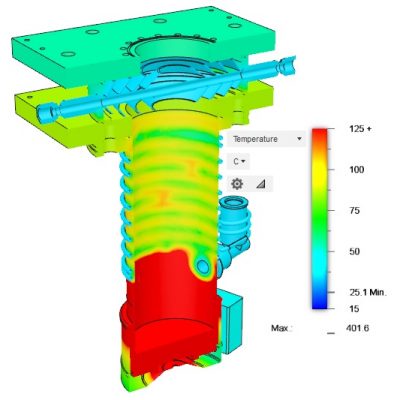 By zooming in on just the baffle, a better look at the thermal gradients across the component can be observed, and are presented in the following sections. For the following reviews of the various simulations, the diffusion pump and adapter plates are omitted from the results to make review easier due to the scaling ranges of the temperature gradients in the full model vs. the individual baffle. However, the baffle data reflects the full simulation results with the diffusion pump and adapter plates thermal responses simulated. 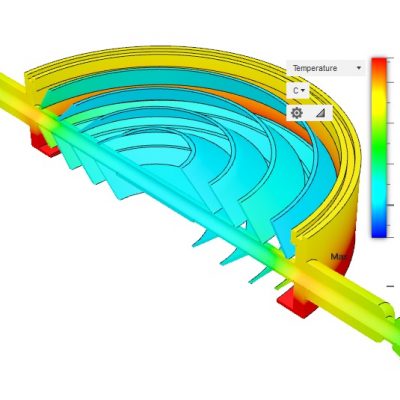 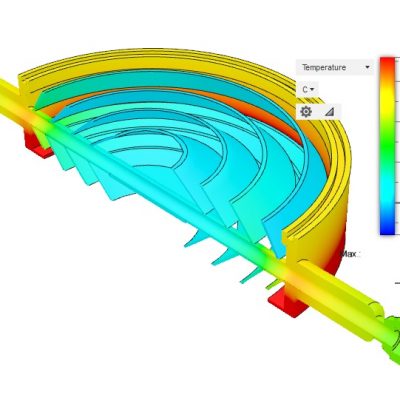 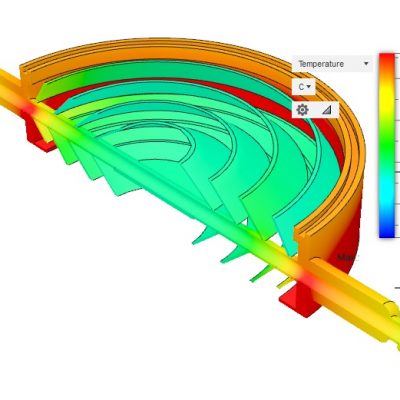 Zooming in on the temperature scale for each of the three cases on just the baffle alone, the effectiveness of the baffle design is strikingly more evident. As can be seen from the results, while the baffle outer casing ends up at a much higher temperature than ambient due to the heat transfer from the diffusion pump underneath, the baffle fins remain relatively stable. This shows that the fins are effectively decoupled thermally from the exterior conditions of the baffle, and therefore are primarily influenced by the coolant flowing through the cooling line.

As described above, the initial three case studies were run a second time with a constant cooling temperature applied to the central baffle cooling line. Zooming in on the temperature scale, directly on the baffle, the effectiveness of the baffle design is once again very evident. 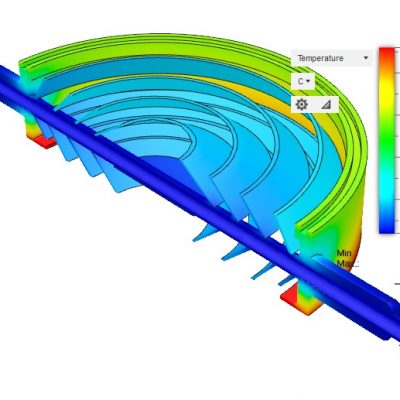 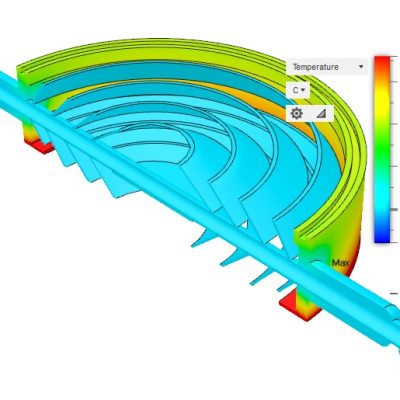 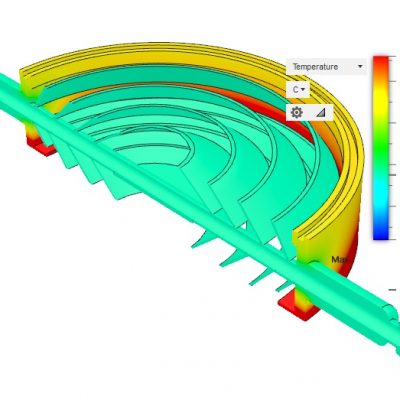 An updated thermal analysis of a new high vacuum pumping subsystem stack consisting of an Edwards EO4 diffusion pump, an 8″ water cooled baffle, and several custom aluminum adapter plates has been completed and reviewed. The simulation includes accurate modeling of the diffusion pump cooling lines, with the internal diffusion pump stack omitted for simplicity. Effects of heat transfer from the diffusion pump oil impinging on the wall surfaces has also been taken into account and better simulated than past studies. Various cases at different ambient temperatures as well as cooling temperatures are explored.

Several key points can be seen from the simulation results of this study with the new baffle and adapter plates Most notably is the effectiveness of the large baffle design, which minimizes heat transfer from the casing to the baffle fins. In this case, the temperature of the baffle fins is related mainly to the temperature of the coolant flowing through the cooling pipe which supports the fins, as well as the internal temperature of the vacuum system. This proves to be an exceptionally effective design in managing heat loads on the baffle, and ultimately improving thermal efficiency of the baffle. Effectiveness of the diffusion pump cooling lines are also observed in maintaining diffusion pump temperatures at safe operating levels. Heat transfer from the diffusion pump to the adapter plates is also established.