High vacuum system engineering involves numerous complex interactions and mechanisms that make problems in system design and operation unique. In order to better study and predict system performance for high vacuum pumping conditions, simulations can be performed. Molflow+ is a free and extraordinarily powerful Monte Carlo simulation code developed at CERN by J.L. Pons, R. Kersevan, and M. Ady that is a standard in the accelerator community for high vacuum pumping simulations in the molecular flow regime. Using the software, system engineering performance can be predicted, and the design verified.

The following study covers the molecular flow simulations for the Small Scale Multipurpose High Vacuum System V5 chamber. This simulation builds upon the prior simulation study, Molflow Simulation of a High Vacuum Diffusion Pump Assembly Simulation, adding onto the pumping stack geometry with the full chamber and high vacuum pipeline for the V5 assembly. The results cover pressure within the system based on pumping speed, outgassing loads, and component geometries. Pressure profile curves for the system have also been generated, and effective speed at the chamber inlet has also been verified. In addition, molecular trajectories have been generated to determine average molecule interactions in the system during operation. Three different case studies are looked at, in order to compare the effects of various levels of system preparation, from a brand new, unbaked setup, to a fully baked, pumped, and outgassed system. These results will be used for further experimental planning for the development of miniaturized intense electron and ion beams with the chamber, and predicting ultimate gas loads and vacuum level the system can handle.

In order to run simulations in Molflow+, a proper input file must be configured and generated. Molflow+ allows user to import .STL files for simulations, in addition to creating custom geometries in the software itself through the user interface. For the following simulations, a simplified model was generated, with proper load parameters applied to the related facets. The first step of the process is to utilize the pre-existing final CAD model of the V5 System assembly. The full assembly model is as follows: 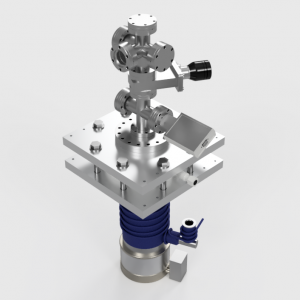 In order to create the proper .STL geometry for simulation, the model was further reduced to creating the remaining internal geometry of the system. This process follows the same steps of simplification as seen in the prior Molflow simulation with the high vacuum pumping assembly. The model is first simplified to the basic internal spacing geometry in the system. After simplification, an .STL file was generated. Because of the small size and relatively simple geometry of the pumping setup, only low mesh settings were utilized, giving more than sufficient resolution for the final simulations with reasonable run times. Finally, the binary STL file was converted to an ascii STL file, and imported into Molflow, which was collapsed and refined for Molflow simulation. 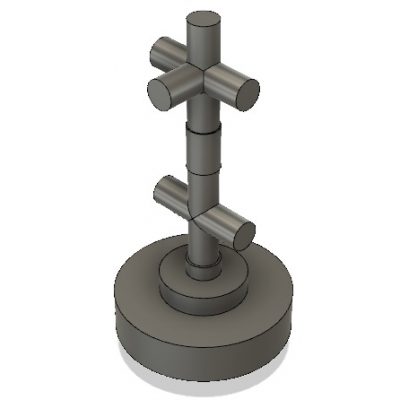 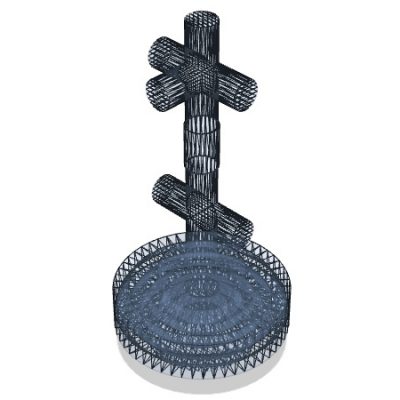 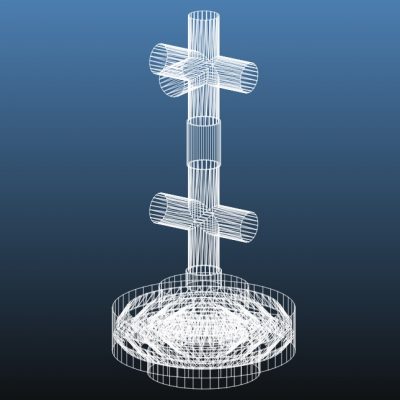 To make simulations easier for running multiple cases of outgassing loads, the major outgassing load groups were selected and saved. Each selection represents the major load associated with the selection, assigned to the facets. Actual numbers used for outgassing for every component and material in the system were previously calculated. Outgassing load calculations can be found in the Engineering Design Calculations section of the Small Scale Multipurpose High Vacuum System V5 documentation page. Major gas loads included in the simulation are outgassing from wall materials during pumpdown, as well as the total outgassing load from the various o-rings in the system, which uses the combined total gas load from outgassing as well as permeation.

Three different simulations were run to compare differences in ultimate pressure based on system conditioning. For each condition, appropriate calculated loads due to outgassing an permeation were calculated and applied to the respective facets. The simulation runs are as follows:

The following PDF file includes all of the facet parameter assignments for all three simulations:

Molflow+ includes many powerful functions, including the ability to simulate and track particle trajectories in a system. Below is a snapshot of average trajectories of pumped molecules (air) in the system. 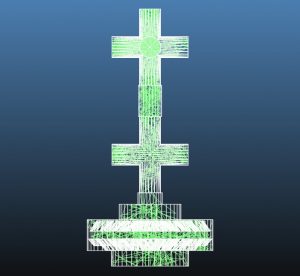 In addition, significant particle interactions can be observed between the top and bottom baffle fin sets, exemplifying the effectiveness of the baffle for preventing backstreaming.

With a pumping speed of 600 l/s with air at 273.15K, the resulting calculated effective speed at the inlet of the five-way cross chamber adapter is around 62 l/s for Simulation 1. This value drops slightly, to 38 l/s for Simulation 2, and to 39 l/s for Simulation 3. These results are much higher than the initially predicted hand-calculated value of around 15 l/s for air in molecular flow. 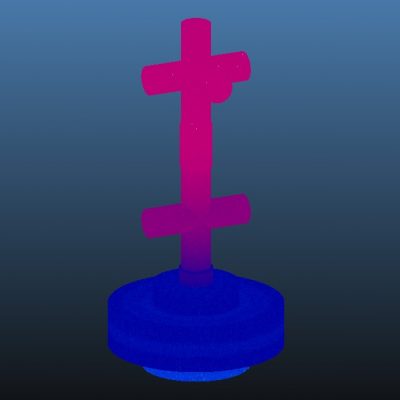 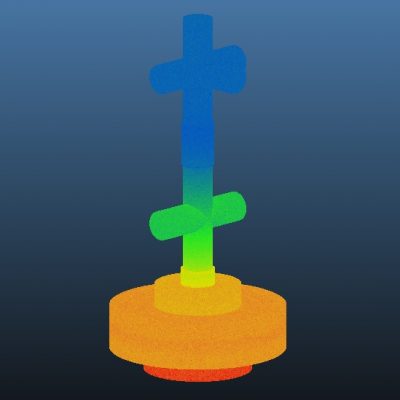 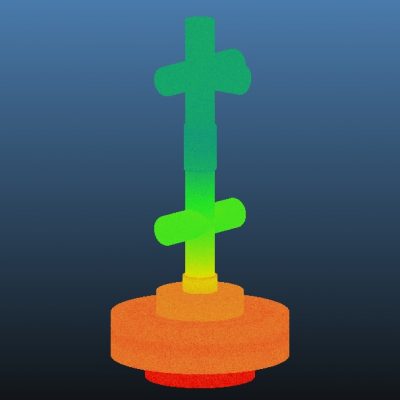 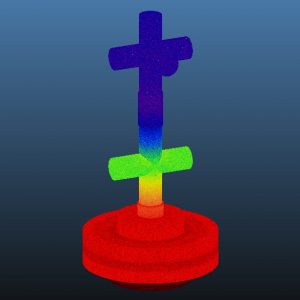 Simulation 1 explores the ultimate vacuum of the full system for outgassing load parameters for all materials in the system when unbaked and pumped for less than one hour. Gas loads for each facet assignment are detailed above for reference. Each outgassing load was calculated based on surface area, material, and associated outgassing rate of the material for unbaked materials pumped for less than one hour. The pump speed of 600 l/s was applied at the baffle inlet, using air at 293.15K for simplicity. Real leaks, virtual leaks, and backstreaming from the pump were also neglected for simplicity.

From the simulation results, several observations can be made. From the 5-way cross, through the pipeline connecting to the chamber adapter, and to the inlet of the pump, the pressure gradient decreases, with pressure at its highest at the chamber, and getting lower closer towards the pump. At the inlet of the 5-way cross chamber, the pressure is around 2.9 x 10^-5 mbar. This value is an order of magnitude higher than the initial estimate of 2.5 x 10^-6 mbar. At the pump inlet, the average pressure is around 2.4 x 10^-6 mbar. 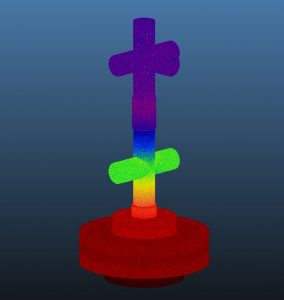 Simulation 2 explores the ultimate vacuum of the full system for outgassing load parameters for all materials in the system when unbaked and pumped for greater than 24 hours. This represents a much better pumped and prepared system as opposed to Simulation 1, which is to be expected during the very first pumpdown of the system. Gas loads for each facet assignment are detailed above for reference. Each outgassing load was calculated based on surface area, material, and associated outgassing rate of the material for unbaked materials pumped for greater than 24 hours. Like the previous simulation study, the pump speed of 600 l/s was applied at the baffle inlet, using air at 293.15K for simplicity. Real leaks, virtual leaks, and backstreaming from the pump were also neglected for simplicity.

From the simulation results, we can observe an order of magnitude average improvement in the total system pressure at equivalent points from the first simulation. The pressure gradients still follow the same behavior as the first simulation, but with noticeably improved performance. At the inlet of the 5-way cross chamber, the ultimate pressure is now around 1.6 x 10^-6 mbar. This value is almost exactly the same as the initial predicted value of 1.023 x 10^-6 mbar. At the pump inlet, the pressure drops to around 9.5 x 10^-8 mbar. This result verifies the goal ultimate pressure of the system of around 10^-6 mbar can be achieved with sufficient pumping, which will allow for the anticipated working pressures of down to 10^-5 mbar to be achieved for the planned experiments for this system. 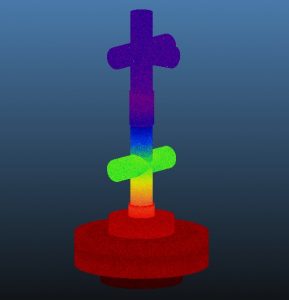 Simulation 3 explores the best possible case scenario for ultimate vacuum of the full system for outgassing load parameters for all materials in the system when baked thoroughly and pumped for periods of greater than 24 hours. This represents ideal UHV system preparation with fully minimized outgassing from all materials present in the system. Like the previous simulation studies, the pump speed of 600 l/s was applied at the baffle inlet, using air at 293.15K for simplicity. Real leaks, virtual leaks, and backstreaming from the pump were also neglected for simplicity.

As can be seen from the above simulation results, the ultimate pressure of the system does not improve significantly from the previous case. With the applied outgassing loads, the resulting ultimate pressure at the inlet of the 5-way cross chamber now drops to an average value of about 1.15*10^-6 mbar, which is a very small improvement from the previous case. This value is about a half an order magnitude higher than the preliminary prediction of 6.856 x 10^-7 mbar for the chamber. At the diffusion pump inlet, the ultimate pressure is on average around 7*10^-8 mbar.

For the system, the simulation results confirms an ultimate pressure capable of around 10^-6 mbar, which will allow for anticipated operation of beam systems in the 10^-5 mbar region in the main chamber. The simulation results also show marginal improvement between a sufficiently pumped system, and a sufficiently baked and pumped system. However, the system design has been confirmed to reach the desired operating pressures for the planned beam experiments.

Along with pressure mapping of the system, pressure profile curves can be generated for any part of the system as desired. For the following results, a transparent measurement plane was added to intersect the model vertically through the center, as well has horizontally through the 4-way cross for vacuum instrumentation inputs, and the main 5-way cross chamber. The resulting pressure plots show the changes in pressure through the system from the inlet of the diffusion pump to the blanked-off chamber inlet. This also allows for better calibration of vacuum gauges in predicting the difference in resulting pressure between the measurement plane and the actual chamber due to differences in conductances and pumping speeds in the system. Both linear and log views are shown for comparison. Y-axis units are in mbar, x-axis units are arbitrary length units, for which the measurement plane is divided into 100 equal segments. 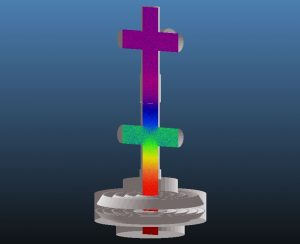 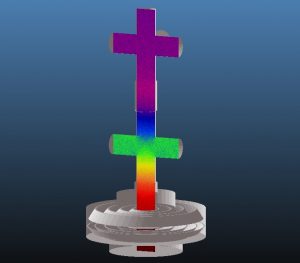 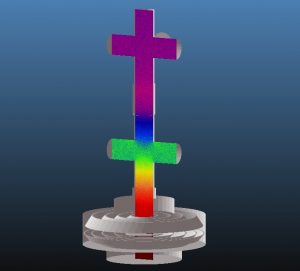 The above graphs show the resulting pressure profile through the pumping assembly. With logarithmic plotting, we can better see the resulting pressure values at the pump inlet as well as the 5-way cross chamber for comparison against the entire system. In all three cases, the pump inlet pressure is about an order of magnitude lower than at the 5-way cross chamber.

With linear plotting, more clear transitions between components in the pumping line can be observed. In addition, the actual values across the system can be better viewed and compared. There is a significant difference in ultimate pressure through the system between simulation 1 and simulation 2, by over 1.5 orders of magnitude. This shows the importance of conditioning the system through extended and continuous pumping. However, between simulations 2 and 3, little additional gain is obtained through baking, resulting in only less than half an order of magnitude improvement in vacuum, with the chamber peaking at around 1.2×10^-6 mbar. This shows the system is still effectively limited due to the gas load from the viton o-rings, as well as the reduced pumping speed at the chamber inlet. However, this value is within required values for experimental operation.

An in-depth and detailed study of molecular flow simulations using Molflow+ for the Small Scale Multipurpose High Vacuum System V5 chamber and pumping assembly is presented. Simulation results show that with improved system preparation, increasingly higher vacuum levels can be expected, however the ultimate pressure is limited due to gas loads from the viton o-rings, as well as lower pumping speed at the chamber and through the pipeline due to the reduced diameter. The simulations also verify that the pumping assembly can reach the desired ultimate pressures in the 10^-6 mbar regime, and verifies the engineering design of the assembly for pumpdown. The resulting effective speed at the 5-way cross chamber was also estimated to be between 38 and 62 l/s, which is higher than initially anticipated from preliminary calculations, allowing for much higher process gas loads. In addition, the pressure at the 4-way cross instrumentation port can be adjusted and calibrated for actual pressures at the 5-way cross chamber, and any pressure in the system can be inferred from the pressure profile plots, allowing for compensation in system readings due to differences in molecular flow from the various geometries present in the system.